William “Bill” Wells, of Dover, Delaware passed away peacefully at his home, surrounded by family, on April 18, 2021. He was 88 years old. Beloved husband to Phyllis (nee Coccia) for 58 years. He is survived by his three children: David (Mary), James (Margot), and Tyler (Denise); eight grandchildren: Cassandra (Mathew), William, Marianna, Emma, Mason, Elise, Dalton, and Lexi; and one great-grandson: Tristan.

Bill Wells’ life was a testament to the idea that through perseverance, one can overcome tremendous obstacles, and attain a level of success and achievement that others might not deem possible. For Bill, success was defined as service to his family and to others. Born in Wilmington, Delaware, he courageously left a poor, broken and abusive home at the young age of 13 to live with his grandmother. After graduating from Wilmington High School, he enlisted in the United States Army and served admirably during the Korean War. After the war, he returned to Wilmington, employed as a foreman at Borden’s Ice Cream and attended night school at the University of Delaware.

He married the love of his life, Philomena (“Phyllis”), in 1962. She encouraged him to pursue a career in education, where he rose from elementary school teacher to elementary school principal (in Smyrna DE, and in Pennsylvania), and finally, to school district superintendent (Smyrna). In the course of almost 40 years in education, he touched the lives of thousands of students and teachers, inspiring all three of his sons to careers in public service. After retirement, he continued his calling in education and guided student teachers in their professional development. Bill was proud to serve in the Knights of Columbus, believing strongly in their motto that “I am my brother’s keeper”.

Bill’s greatest joy was his family. He loved spending time with all members of his extended family, and loved having them come to his house, where he delighted in the progress of his garden. We will miss him terribly.

In lieu of flowers, contributions can be made in Bill’s memory to Catholic Charities or the American Red Cross. 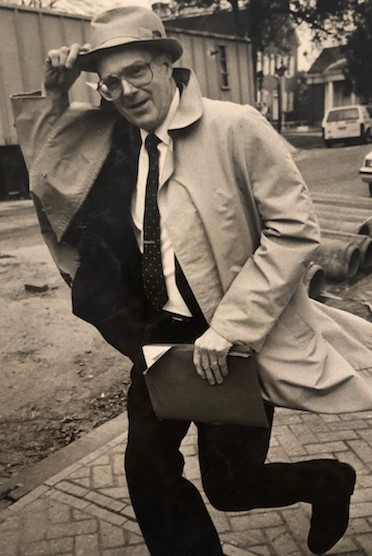 Visitation will be private. Mass of Christian Burial will be held at 11:00AM on Thursday April 22,2021 at Holy Spirit Roman Catholic Church, 12 Winder Rd., New Castle, DE 19720. Interment will be private.