William Arthur Marsh, 61, of Philadelphia, Pennsylvania, formerly of Wilmington, DE passed away on Sunday, April 21, 2019 at the Hospital of the University of Pennsylvania.

Bill was born in Wilmington, Delaware, to the late Robert Marsh and Anne Marsh. He was a graduate of Concord High School, where he was a talented trombone player. He received his bachelor’s degree from the University of Delaware, where he was the president of Sigma Phi Epsilon fraternity. He was the proud owner of his company, IVS Associates, Inc., which was founded in August of 2000. He was an avid runner and completed hundreds of 5Ks, 10Ks, and half marathons.

Bill’s humor and infectious laugh will be most missed by those who knew him. He loved making people smile and had an art of finding humor in even the most difficult situations. An avid Philadelphia sports fan, his love for the Phillies, Eagles, and especially Flyers, was surpassed by none. He enjoyed reading Jack Kerouac and William Faulkner, as well as writing short stories. He loved his two daughters and was so proud of them.

The family would like the thank the doctors, nurses, and other health care staff at the Hospital of the University of Pennsylvania for the care they provided Bill at the end of his life.

A memorial service for Bill will be held on Friday, April 26 at 11am, with a visitation starting at 10am at Chandler Funeral Home, 2506 Concord Pike, Wilmington, DE 19803. 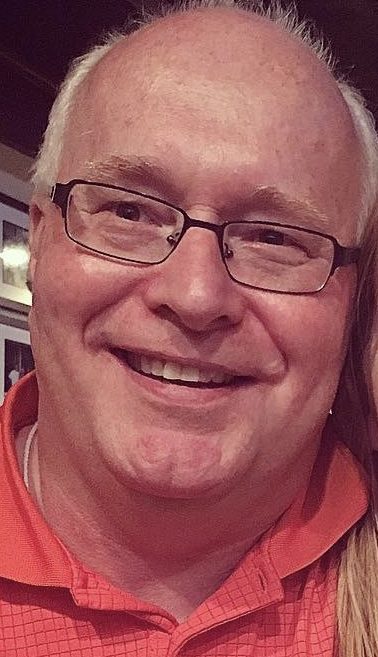 A memorial service for Bill will be held on Friday, April 26 at 11am, with a visitation starting at 10am at Chandler Funeral Home, 2506 Concord Pike, Wilmington, DE 19803.

Pam Gill lit a candle and writes,
I have good memories of Bill.
Jeanne Buckworth writes,
So very, very sorry to learn of Bill's death. When I worked with him at St. Paul's Church, I loved his wit, sense of humor, his abilities. I wish I could have known of his heart issues. My deepest sympathies to all of his family. I use to love seeing him in church, with his daughters cuddled close.
Gia Capriotti lit a candle and writes,
Bill was an amazing person who was kind, honest, funny, gentle, patient, and truly pure at heart. He personality was infectious. He had an enormous heart and did what he could to help those in need by going on mission trips with the church, helping the homeless, and the ladies at his sister’s shelter. He was childlike with his humor and could put a smile on anyone’s face. When Bill loved, he loved with all of his heart and showed that in every way possible. He was an honest man who only set out to do good in the world, and only see the good in people. A very optimistic person who chose to look at life full of opportunity to do better. He will be forever missed!
Alan Puerte lit a candle and writes,
Bill was an excellent person, humble and very smart. He always told good funny stories. We will all miss him. Condolences to the family.
Mary and Allen Ingram writes,
I am so sorry to hear of your fathers passing. He was such a wonderful man and I will treasure the memories of teaching Sunday school with him. He always made me laugh and smile during difficult times. I will keep your family in my prayers. Mary Ingram
Beth Smith lit a candle and writes,
Heather I’m so sorry to hear of your dad’s passing you and your family are in my thoughts and prayers love ya
Melissa writes,
So sorry for your loss. Your father is so proud of you , you've gained a gaurdian angel❤️
Debbie Romano lit a candle and writes,
Sending love to Bill's family. Bill was a customer of mine and I had the pleasure of working for him for the pasty 7 years. He was a wonderful man. May he rest in peace.
Ken Queppet writes,
I knew Bill since Dec. 1982. He initially was a leader and mentor to me and another of my great friends, Creig Dunlop (hired same day as me). After I changed career paths, Bill and I became close life long friends. We saw a lot of great times together and helped each other during the challenging ones. Bill was highly intelligent. He was exceptional at taking a complex problem and mapping out the best course of action. The excellent short stories and poetry he wrote were obviously publish worthy. He was spiritual, generous and could make me laugh to the point of near hysterics. :) He was passionate about the love, belief and pride he had in Heather and Maddie. Bill and Barbara raised two awesome daughters! Gia lost him way too soon. I’m consoled that he is with God and no longer has to endure the pain and suffering from illness in recent years. Rest In Peace my great friend. - Ken Queppet
Jay Brightman writes,
Condolences to family and friends.
Danielle writes,
My condolences to the family. May the God of all comfort be with you at this time.(2 Corinthians 1:3,4)
Cliff (Aquil) laibhen lit a candle and writes,
Thank you Sir: For teaching me the intricacies of hockey, sitting with me at the flyers game and relating those lessons to that of life. Although I did not no you long my friend you will be missed.
Peter Wolosyn lit a candle and writes,
My condolences to Bill's family and friends. I only knew Bill a short time, he was my roommate at HUP. I just had my aortic heart valve replaced and felt terrible and in a lot of pain. Bill was very kind and compassionate to me raising my spirits. He told me about his daughters in the health field and about his son coaching volleyball. He was very proud of their accomplishments. We both are avid Philly sports fans and he had a special place for the Flyers. We watched the 76ers on TV and we both reacted the same, yelling at refs and cheering the sixers. He joked with the nurses and made me laugh which was hard to take because of my surgery. He told me many times that this too shall pass speaking from experience. I thank God for putting me in the same room as Bill because he made my stay feel like I was with my a good friend. He displayed strong positive affirmations, a tough job in these days. God bless you Bill...you will be missed.
Edward T writes,
Very nice guy. Never said a bad word about anybody. Always respectful to people of all ages, races and religions. We who knew him and worked with him appreciated his honesty and optimism. I just talked to Fred and learned about Larry too. A sad day for all of us.
Lourine lit a candle and writes,
What sad news. He was a nice person. We will miss his funny jokes at the annual meeting. No one told us.