Russell was born in June of 1919 in Altoona, PA, graduated from high school in 1937 and Zeth School of Business the following year. At the outbreak of WWII he enlisted in the U.S. Navy, serving in the U.S. and Pacific Theaters. After completing four years of service to his country, he returned to Penn State under the G.I. Bill of Rights to finish his education, receiving a B.A. degree in Commerce & Finance. He met his future wife, Helen, at Penn State and they were married in Gettysburg. Russ was a member of Tau Kappa Epsilon Fraternity and the National Social Science Honor Society. Upon receipt of a job offer from the DuPont Company, he moved to Wilmington where he enjoyed a 34-year career in the Employee Relations and Finance Departments, retiring in 1982 as Senior Insurance Analyst.

Throughout his lifetime, Russ was active in civic and charitable affairs, serving as president of both the Limestone Acres Maintenance Corporation and the former Lora Little Elementary School P.T.A. He was a Treasurer of the Oakwood Valley Swim Club and a dedicated band booster and announcer during the heyday of the John Dickinson High School “Rams” Marching Band in the mid-70’s.

For many years, Mr. McCauley served on election polls, as a volunteer medical driver for Lutheran Community Services and for 16 years, as a member of the Board of Directors of Lutheran Senior Services in Wilmington. He was a long-time member of the Retired Men’s Luncheon Club and a founding member of St. Philip’s Lutheran Church where he served as lector, counter, church council, and member of the Finance Committee.

Russell will be sorely missed but not forgotten by his family and many friends. He will be remembered for his sense of humor, competitive spirit and his inquisitive and expansive command of the English Language. Until sidelined by injury in his late eighties, Russ was an avid tennis player with the “Model A’s” Tennis Club. In more recent times, he enjoyed playing bridge and pursuing his hobby of chair caning.

The family would like to extend their deepest appreciation to the residents and staff of Jenner’s Pond Retirement Community for their care, love and friendship towards Russell over many years. In lieu of flowers, memorial gifts may be made to St. Philip’s Lutheran Church, 5320 Limestone Road, Wilmington, DE 19808 or to Jenner’s Pond Benevolent Care Fund, 2000 Greenbriar Lane, West Grove, PA 19390. 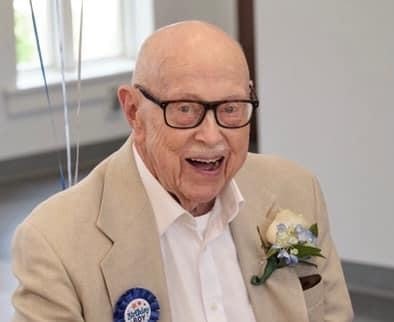 A Memorial service will be held at St. Philip’s Lutheran Church on Saturday, September 5th at 11:00 am. Visitation will begin at 10:00 am. Please note Covid-19 rules will be in effect for those attending in person. Details to livestream the funeral service can be found on the St Philip’s church website (www.stphilips.us).

Ron Brabson writes,
To the family-- My sincere condolences to everyone. RAB JDHS 71
Bernie Puszczappy thoughts lit a candle and writes,
Doug our condolences for you and your family. Always keep happy thoughts. Bernie & Denise Puszcz
Dawn Buckworth writes,
So sorry, Greg, Debbie, and family, to hear of the loss of your beloved father. He certainly lead a long and prosperous life. Keeping you lifted up in love and prayer.🙏