Robert J. Krapf of Hockessin, Delaware, died August 3, 2019 after a long illness.  Bob was born in Wilmington on August 4, 1923 to Daniel and Rita Krapf.  He was preceded in death by his wife, Alice (Hyland), his brother, Earl, and his best friend and cousin, Paul Bacher.

Bob grew up in Wilmington and attended Wilmington public schools, graduating from Wilmington High School.  He went on to attend the University of Delaware, graduating in the early years of World War II.

Bob enlisted in the infantry during the war and served with distinction.  His division was part of the push across the Saar River toward Germany, and he was awarded the Bronze Star for his service in that part of the campaign.  Bob was wounded soon after that and returned home with a Purple Heart.

After the war, Bob pursued a lifelong career in the insurance business.  Prior to his retirement, he was President of Concord Benefits Service, a provider of insured employee benefits.

Bob enjoyed travel, good food, good wine, and good fellowship.  Over the years, he traveled extensively with Alice and their many friends, his favorite trip being to cruise along the Rhine River.  Alice and he also spent many summers at their home in Rehoboth Beach.  In his younger days, he was involved in the Arden theater and played the trombone for several dance bands in the Wilmington area.  His rendition of “Ramona” lives on in the memory of his family and friends.

Bob is survived by his sons, their wives, and their grandchildren:  Dan (Diane) of Rehoboth Beach and Ponte Vedra Beach, Florida, and his children Sally in California, Danny in Newark, and Jimmy in New Jersey; and Rob (Jean) of Corner Ketch and their son Ben (Caitlin) in Ontario, who are parents of Otto and Deckard, Bob’s great grandsons.  He is also survived by his niece Martha Keller (Bob) and her children Katie White (Joel) and David Hintz (Mary) and their children.

The family thanks the staffs of Stonegates, The Summit, Brackenville Center, and Seasons Hospice & Palliative Care for their kind and professional care of Bob over the past few years.

Interment will be private.  A memorial for family and friends will be announced later.

In lieu of flowers, donations in Bob’s memory may be made to The Michael J. Fox Foundation for Parkinson’s Research or to the charity of your choice. 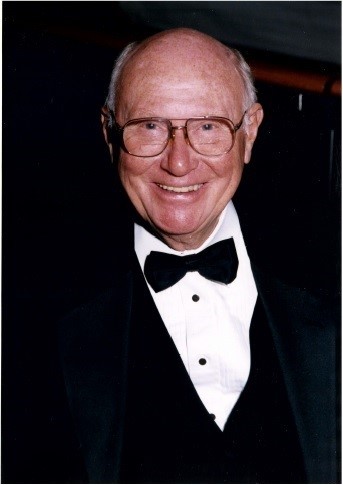 Sonja Pfautz writes,
Dear Family, Bob was one of my very special friends. I have so many memories of travel trips, parties at the University Club and much more. His beloved Alice was also a wonderful friend. We reunited when I moved to Stonegates but then we both moved on. I send my sincerest condolences to all. Much love, Sonja Pfautz