Born in Springfield, MA in 1930, he was the son of the late Joseph H. and Eunice Bodwell. Robert served in the United States Air Force from 1952-1955 during the Korean War as First Lieutenant. From 1955-1992, he worked as a chemical engineer for DuPont at locations in Niagara Falls, Memphis, Orange, TX, and Wilmington. He finished his career in Production Management of Polymers and Neoprene. Robert has been a member of Aldersgate United Methodist Church since 1968, and a member of the DuPont Country Club, where he played with the same group for over 20 years. He enjoyed traveling through the United States and other countries with Joanne and spending 1-2 weeks each year with the whole family in the Poconos. 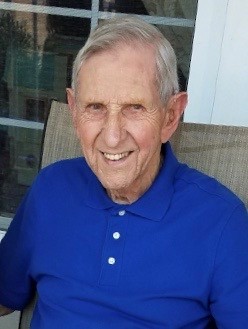 Sally lit a candle and writes,
Kelly and family So sorry for your loss. Prayers for all. God Bless Sally
Rebecca Welch (Granddaughter) lit a candle and writes,
My grandpa, lovingly called “Bop”, was a wonderful grandfather!!! My memories of him include playing ping pong in the basement, pool, and playing war! Also, I believe it was him Who introduced me and my brother to olives and cream cheese on a bagel! yum!! I remember him being a very patient and gentleman. He was a man who spoke few words sometimes, probably because Grammie spoke so many haha! He was a very wise man! I will always love and miss him!!
Stephen Reid writes,
My condolences to Joanne and all of Bob's family. My wife, Beverly Bodwell Reid, first introduced me to her Uncle Bob 30+ years ago. It was a pleasure to spend time with him at many New England Bodwell Family Reunions. Whenever we spoke Bob was always quick to smile and to sprinkle our conversations with wonderful witticisms. He was a very fine gentleman who will be missed.
Sonja and Mark Brindle lit a candle and writes,
Sue, Bruce, Kelly, Josh, Dan, Mel and Family, Our most sincere condolences for your loss. There are no perfect words to offer to ease your loss, but you have so many happy memories to reflect upon and we were Blessed to have had the opportunity to have met Bop at Kelly and Josh’s wedding last October. Sonja and Mark
Mary Dyar writes,
Nancy and family, there just aren’t enough words to say when we lose a parent. A friend told me when I lost my dad, that losing a parent changes us in so many ways. May all of you have the peace of God our Father during this time. May you have peace, knowing that your dad is with the Lord and has been made whole. Love to all of you, Mary.
Dianne Whittaker writes,
Joanne--my heart goes out to you on the loss of your beloved Bob.
Richard Cohen writes,
Dear Joanne and Family, I am keeping you in my thoughts and prayers during this time of sadness. With my friendship, support and sympathy, Richard Cohen (Delaware Curative Workshop)