Mary B. Page, 98, passed away peacefully in her sleep at the Christiana Hospice, on Friday, June 7, 2019. Born in Indiana and daughter of Arthur and Mae King, she attended Ball State University following high school, and later, moved to Michigan, where she met and married Paul L. Page, a Navy Aviator. During World War Two, she worked on a rationing board while Paul was a Fighter Pilot in the Pacific. In 1947, they made their home in Glens Falls, NY, where Paul worked as a Chemical Engineer for the Imperial Wallpaper Company and later for the Hercules Chemical Company. They spent eight years in Glens Falls, six years in Chagrin Falls, Ohio, before moving to Hockessin, Delaware in 1967, for the remainder of their lives, working and raising their three children.

Mary was active in the Methodist Church of Hockessin, played on the women’s golf team at the Hercules Country Club, and was active in the Big Band Dance Club. She excelled as a mother and homemaker who enjoyed sewing as an incredible seamstress. When her husband retired from Hercules, they travelled throughout the United States and overseas, then started their own business where she served as Vice President. She did extensive genealogy research on both hers and Paul’s family trees.

She was preceded in death by her husband, Paul, by all members of her family and by all of Paul’s siblings and parents.

Mary’s daughter, Lori, was her primary care giver along with Lori’s two daughters, Amanda and Brittney. 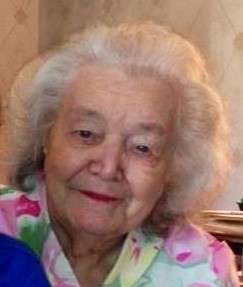 Funeral services will be held on Wednesday, June 12, 2019 from the Chandler Funeral Home, 7230 Lancaster Pike, Hockessin, Delaware at 11 am. Relatives and friends may call at the funeral home from 10-11 am.

She will rest with her husband, Paul, in the Delaware Veterans Memorial Cemetery, in Bear, Delaware.

Lori lit a candle and writes,
I miss you already mom but I know your in a good place and now with Dad. Love you forever and will always be miss from all of us. OXOX’s Lori 💕💕💕
Sharon (Garrison) Anderson sada writes,
My prayers & sincerest sympathies are with you all as you lay your mother to rest. Joyfully she is with her husband once again..& all of your relatives that have gone on b4 her & having a great time being reunited with them all. May she be held in the Lord's loving arms forever....
Sharon (Garrison) Anderson lit a candle
Paula Wilson lit a candle
Tyler (Phillips) Ewing lit a candle and writes,
I met "Mom" Page in 4th grade when I met Lori. Lori and I became pretty much joined at the hip. I traveled to several places over the years with "Mom" and "Dad" Page. Florida, Michigan, Indiana, Colorado, the Badlands, most of the traveling I've done in the continental US were with them. The Christmas letters didn't stop coming until a few years ago, I think 2016 was the last letter I received. I pray for peace for her children and grandchildren. I know it will be hard in the coming days/weeks and there will be those moments when you will feel that you just can't go on but you will find the strength somewhere. Know that you are loved by many.
Cindie Connors writes,
Oh My Lori-La!! May the Peace that passes All Understanding cover you and carry you through this time of sorrow. Take comfort in Knowing that you and the girls were the Best Caregivers a Mother could ask for. I pray that your memories of the good times fill your hearts and dreams until you meet again in Heaven! I Love You and am here for you My Dear Sweet Friend!
Debbie Willard
Connie Gonzalez writes,
Heaven gained another angel. God bless you and your family my deepest condolences😇💙👑