Marguerite E. (Blanchard) Dunn, age 64, passed away peacefully on March 17, 2021 after a long battle with breast cancer. Her family were by her side at the time.

Marguerite was born in Sufferin, New York, to Elwood P. and Barbara K. Blanchard. Marguerite graduated from Mt. Pleasant High School and then the University of Delaware with a B.S. in Nursing. Marguerite married Robert (Bob) Dunn in 1984, and together they raised three sons, Geoffrey (Wetzel), and Rob and Eric Dunn.

Marguerite’s greatest joy in life was her family. She actively supported her sons’ interests in sports and the arts, whether on the field or stage, in concert or in a pool. She volunteered as a designer / seamstress for the Tatnall Theater Program for 15 years, and she was a Level 1 swim official for YMCA swim meets.

Marguerite left nursing to focus on raising her family, and later worked at Kitchen Kapers for 10 years. In 2011, she transformed her lifelong passion for sewing into her own business with her friend and college dorm mate, Sue Skinner, opening a custom drapery workroom for local designers.

Marguerite loved spending time at the family home in Rock Hall, MD. Long weekends with college friends and family vacations led to legendary good times. Feasts with freshly caught crabs from the creek behind the house provided a lifetime of laughter and happy memories. Sunsets with a glass of wine by the fire were a moment of quiet beauty. Marguerite never missed an opportunity to host friends and family, and passed on a love for cooking and entertaining to her sons.

Marguerite was a strong person of deep character. In life, as in sewing, it was either exactly right or wrong. She was not afraid to offer her view and she had a gift for phrasing that her friends and family collectively celebrated. She was very loyal to her friends and built deep, long lasting relationships. In the final months of her battle, her friend Josephine McBride was a constant support.

Marguerite is survived by her husband Bob, father Elwood Blanchard and stepmother Barbara D. Blanchard, her three children Geoff (Kelly), Rob and Eric, grandchildren Calvin and Gwendolyn, sister Bobby (Roger), brother Neal (Mary), as well as many nieces and nephews. The family thanks the doctors and staff at the Helen Graham Center for their compassionate and attentive care.

In lieu of flowers, please make donations in Marguerite’s memory to the Helen Graham Center or Serviam Academy, and tell your children and parents how much you love them. 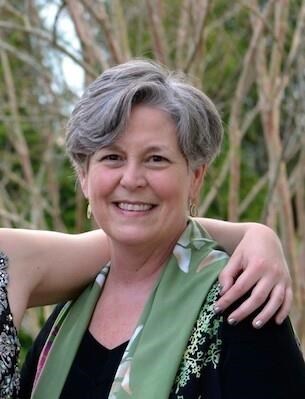 Burial will be private. A celebration of life will be scheduled once larger gatherings are permitted.

Bert and Marilyn Green writes,
Dear Bob, Marilyn and I are terribly sad to hear about Margie's passing. We send our best wishes and prayers to you and your family. May your memories be a solace to you and may you have peace. With love, Bert and Marilyn
Paul Sproul writes,
What can we say. Just hope the family weathers this storm. Paul & Ethel
Diane Wood writes,
Bob, my deepest condolences to you and your family. I hope all the good times and memories, will help get you through this incredibly tough time.
Mark and Linda Wetzel writes,
Bob, Rob, Eric, Geoffrey and Kelly, We are so sorry for you loss. Marg was a force of nature and she will be missed by everyone. Draw on the love and support of your family and friends. Lift your spirits with the love and energy of Calvin and Gwen. Peace be with you, Mark and Linda
Peter Kopf writes,
Bob My thoughts and prayers go out to you and your family. I have many fond memories of Marg however the one that stands out is a sunny fall day in 1986 when we were doing a "lit drop" for Dallas Winslow's campaign for Attorney General. We had finished a couple of neighbors but had many "push cards" left so Marg suggested we "plaster the cars" in the Concord Mall parking lot. By 1986 I was already in the political process for 15 years but still went "by the books". She tried to convince me for about 10 minutes and finally said to me "what's the worse that could happen is that Security would throw us off the property". That's exactly what they did but not until we did about 3/4 of the cars. I still remember that day and have a good laugh whenever I think about it. Peter Kopf