Malcolm A. Smook, age 98, of Newark, Delaware passed away November 12th, 2022, in his home after a brief illness. Malcolm was born in August 1924 in Seattle, WA. He earned a Bachelor’s degree in chemistry at the University of California in Berkeley and a PhD from Ohio State University. While in college, he went to Officers Naval training. He served in World War II aboard the USS Bassett, one of the several ships that was involved in the rescue of the survivors of the Indianapolis. He joined DuPont Elastomer’s department immediately after graduating from Ohio State, and he became a long-term resident of Wilmington, Delaware.

Malcolm is predeceased by his wife of 67 years. He is survived by his dearest friend, Ellen Cornish Whitten, two daughters and their husbands; Fran and Martin Fenton, and Valerie and Thomas Martin; and two brothers Gary and Roger. 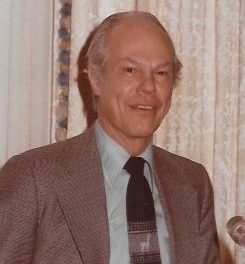 Following Malcolm’s wishes, there will not be a service and burial will be private. No flowers please.

David Cress lit a candle and writes,
To the family, I extend my deepest condolences. My father, Harry, much respected and enjoyed his long professional relationship and friendship with Mal.
Charles Houghton writes,
It is very sad to find out that many from long ago have gone to a better place, where we all especially when we went scuba diving off the NJ coast. Occasionally, his wife and two daughters would come along. He was a great diver, but his wife and daughters were novices. Mal was always a perfect gentleman, and a good friend, and excellent dive buddy. Sorry that he is no longer with us. Good-bye old friend, and happy dives wherever you are.
Zosh Hutton writes,
Fran and Val, My deepest sympathy to you both. Such an interesting and inspiring life.