Lydia Richards Boyer, age 89, formerly of Wilmington and Centreville, died on September 13, 2021, at Stonegates, Greenville.  She was the oldest child of the late Robert Henry Richards, Jr. and Harriett Kellond Richards.  She grew up on Broom Street and attended Tower Hill School and Warner Junior High.  She was graduated from Madeira School, McLean, Virginia, and Connecticut College for Women (now Connecticut College), New London, Connecticut.  After graduating from Connecticut, she married Ensign David Boyer, also of Wilmington.  They lived in Boston, Key West, and Charleston, South Carolina, before moving back to Wilmington.

While living in Key West, Lydia’s and David’s first child was born.  Two more children followed after their move back to Wilmington.  Never content just to stay home, Lydia pursued many interests that took her far and wide.  She was a devoted alumna of Connecticut College and also served on the Board of Trustees of Tower Hill School.  She was a frequent and competitive bridge player.  An accomplished cook, she specialized in Eastern Shore and Delmarva cuisine.  An avid outdoorswoman, she enjoyed hunting and fishing and took a leading role in training the family’s hunting dogs.  She was the only woman in the family to have shot a deer.  For many years she designed and created herb gardens.  She was a Master Gardener and took several courses at Longwood.  Weekends and vacations often found Lydia fly fishing in the Poconos, New Brunswick, or Iceland.  Often Lydia would have the best catch of the day, but that depended on who was doing the telling.

Any enumeration of Lydia’s accomplishments would be incomplete without mention of her devotion to the Republican Party.  Although her political affiliations have changed, the memories remain of the years when she served as Republican City Chairman (Wilmington) and as delegate or alternate to many state and national conventions.  She was an alternate to the Republican National Convention in 1968, and received a phone call from former President Dwight D. Eisenhower urging support for his friend Dick Nixon.

After leaving volunteer service to the Republican Party, Lydia was appointed to Governor Pete du Pont’s cabinet as Secretary of Administrative Services.  She served from 1977 to 1981.

Lydia’s grandchildren will remember fondly the days spent at Camp Grannie, held at Lydia’s and David’s farm on the Chesapeake.  The next generation of Camp Grannie was being planned when she died – she was only waiting for the new generation of campers to be born.

The family wishes to express their heartfelt appreciation to the many people who helped Lydia during her time at Stonegates, both in her cottage and in the Health Center. In accordance with Lydia’s wishes, there will be no service.  In memory of Lydia Richards Boyer, contributions may be made to: Connecticut College,  Office of Advancement, 270 Mohegan Ave., New London, CT 06320; Tower Hill School, 2813 W. 17th St., Wilmington, DE 19806; or Planned Parenthood, 625 N. Shipley St., Wilmington, DE 19801. 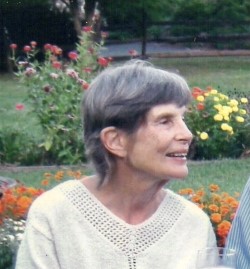 grace w lloyd writes,
Lydia was my favorite ! We had many great conversations in physical therapy. I will miss her tremendously. Beth