Joe (Jimmy) was a 1964 graduate of Harvard University. Joe was an achiever. He organized the first Harvard University Hockey Club Team, was a disciplined weightlifter and later became a trainer for the Washington Capitals.

Joe served as a Fighter Pilot and Captain in the US Air Force, stationed in Bitburg, Germany. After serving, Joe earned his MBA from Harvard Business School. His executive business career was extensive. In 1988 he founded and owned the student lending company, National Education.

Joe’s true love was aviation. He enjoyed flying his own personal jets at every opportunity. He was the owner of Warbirds of Delaware and raced his jets at the Annual Air Race Championships in Reno, Nevada.

Joe loved life and took every opportunity to live it his way. With his passing, an unfillable void remains for all that knew and loved him. He has permanent wings now; may he forever fly the heavens.

Joe is survived by his brother Thomas Gano and his sister-in-law, Mary Gano of Naples, FL. He is also survived by his niece Melanie Kamen of AZ, nephew Thomas J. Gano of FL, brother-in -law John Carroll of Concord, MA, nephews Josh Carroll of CA, Jeremy Carroll of MA and their families. He was predeceased by his sister Anne Gano Carroll, previously of Winchester, MA. He also leaves behind many close friends in Delaware, Nevada, Maryland and Pennsylvania. 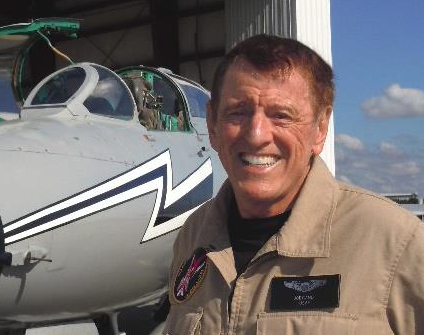 There will be a memorial gathering at Chandler Funeral Home, 2506 Concord Pike, Wilmington, Delaware 19803 on

Bobby Wingate writes,
Cpt Gano was a American Warrior, Patriot. During his Service to Our Country stationed at Bitberg Air Force Base Germany his Squadron 525th FIS was the Tip of The Spear for all events of Aggression shown by the warsaw pact communist countries. He was a True American in Heart,Soul and Mind. I was part of his ground crew at ILG and Honored to do whatever was needed. He was a Great Friend and will miss him and all operations I participated with him over the years. RIP CPT GANO Your Friendship Greatly Appreciated. Never Forgotten Sir.
Steve Walter writes,
Joe was always a good friend to me. He was accommodating during my visits to ILG to lend moral support and photo services. He also saw to it that I was taken care of when I came to Stead Airport for the races. I will truly miss my visits with him. May his memory be for a blessing.
Dean Winslow lit a candle and writes,
Rest In Peace, fellow Airman. We will share a drink in that awesome bar In Heaven’s O club…
Ted and Irene Papas writes,
Joe was a good friend to the family. He will be missed at the many family gatherings he attended over the years. We were so sorry to hear of his passing. Our condolences to his family. May his memory be eternal.
Richard Neil writes,
Joe was my partner in our Mig 23s and also a friend and a good man he will be missed.
Josh Hamilton writes,
It was an absolute pleasure to have met Joe and join the Warbirds family over the past year. I'm forever thankful to the good friends and opportunities that Joe's kindness afforded me personally. You will be missed, sir.
Gary Carr writes,
I've known Joe for 16 years as a ground crew member. I've ridden with him in Pipsqueak a few times and became a member if the 7G Club. He was a pilot that knew his business. A true professional. You will be missed by us all Joe. Someday I'll see you on the "other side" for a ride in that new Mig 21 and L39. Warbirds of Delaware will live on.
Raf Collado writes,
I always called Joe my godfather. He got me started in the Jet warbird community by giving me a ride in Pipsqueak. From then on he mentored me in acquiring my fleet of 3 jet warbirds and introduced me to the Reno Air Races. Joe was always quick with advice and support. He leaves an irreplaceable void in my life and that of many others. I will miss him greatly.
Patrick F Kealey writes,
Joe was an amazing man. He will be missed greatly by our family. When you were with Joe he just inspired you with his strength and confidence. He took my son under his wing during his days in the military and was a great mentor to him. We are so grateful to call Joe a wonderful friend! We will be miss him dearly. We take solace in knowing that his last “hop” was the greatest he’s ever taken. He’s with God now!
Jim Kohler writes,
Joe, You have one more good flight left in your system and this is it. You are cleared for take-off and cleared for an unrestricted climb. I sure enjoyed your friendship. God Speed Joe!
Frank and Annita Kasparian lit a candle and writes,
Joe Gano’s and my family lived very close together in Arlington, MA. Our friendship began over 65 years ago. We were “Jimmy” and “Frankie” at the time. He was two years ahead of me in school. We had a number of boys in our group. I was the youngest and Joe always made sure I wasn’t picked on. Strengthening our bond was a mutual strong desire to become Air Force pilots. Fortunately it happened for both of us. Shortly after “Warbirds” began competing in the Reno Air Races, Joe asked if my wife Annita and I would like to become volunteers on their support team. Of course we accepted, and his incredible skills as a pilot and supervisor are a matter of history. He will be deeply missed… Rest In Peace Jimmy🙏🏼
Thomas Osterholm, Cap. UAL writes,
My most sincere condolences to the family and friends of Joe. Joe provided me, along with Richard Neil and Steve, an awesome experience putting together the Meg 23s in Wilmington years ago. Joe always had a can-do attitude and was a positive influence on mini aviators. Fly was Joe and rest in peace.
Charlie and Tam Camilleri writes,
A terrible loss to our September family, Joe you will be missed. Your friends and fellow Reno air racers from Australia
Sandra Caldwell (Sandy) lit a candle and writes,
It was truly an honor to have known Joe. We worked together side by side for 17 years building National Education. He was my mentor and friend. I was shocked to learn of his passing. My most sincere condolences to his family. Part of who I am today is because of Joe. He had more faith in me than I had in my self. He always told me to "check your six." He always had my back. I miss you and love you with all my heart. Someday on the "other side" I may just take you up on that ride in your Mig. God speed my treasured friend. You're soaring with the Angels now.