Born in Howard County, Indiana in 1932, Dr. Peters was the son of Ralph and Thelma Peters. He graduated from Greentown High School and was on the high school basketball team that beat Kokomo High School in the Sectional Championship in 1950. Dr. Peters attended DePauw University on an athletic scholarship where he played basketball for four years, football for two years, baseball for one year and track for one year. He was a member of Delta Kappa Epsilon fraternity.  Dr. Peters graduated from DePauw with a Bachelor of Arts in Education in 1954.  While at DePauw, Dr. Peters joined the Air Force ROTC and after graduation, he served in the United States Air Force (USAF) as a 2nd Lieutenant, including in Korea and Japan. Dr. Peters participated in USAF Pilot Flight Training as well as Supply Officer Course programs. Dr. Peters also played basketball for the Nagoya Air Force base, and his team won the Far East Air Force Basketball Championship in 1957.  Dr. Peters was promoted to Captain in the USAF Reserves.

After his tour of duty, Dr. Peters attended Purdue University for pre-veterinary classes and then attended Cornell University College of Veterinary Medicine, graduating in 1962.  At Cornell, he met Elizabeth Bach (Betsy) Peters, his beloved wife of 44 years and a fellow graduate of Cornell University. His professional focus was on large animals beginning his long and distinguished career with race horses at Vernon Downs Race Track, Liberty Bell Park, Rosecroft, Garden State Park, Pinehurst in the winter and Brandywine Rack Track in the summer.  Thereafter, in addition to his private practice, Dr. Peters served as a veterinarian for the State of Delaware, including at Dover Downs and at Delaware Park as Chief Veterinarian for the Thoroughbred Racing Commission of the State of Delaware. Dr. Peters was licensed to practice veterinary medicine in Delaware, Indiana, New Jersey, New York, North Carolina and Pennsylvania. In 2002, Dr. Peters was named Veterinarian of the Year by the Delaware Veterinary Medical Association. He was highly respected and revered by both thoroughbred and Standardbred horsemen and was a mentor to countless veterinary students and peers.  Dr. Peters retired in 2017 after making significant contributions to the horse racing industry and the veterinary profession for over 55 years.

Dr. Peters was always active in coaching basketball and baseball Little League and an avid fan attending his children’s activities when they were growing up. Dr. Peters also spent time with his extended family and regularly kept in touch with all his relatives. Dr. Peters enjoyed raising cattle and farming on his farms in Delaware and Indiana in his spare time.

Dr. Peters was predeceased by his wife Betsy in 2007 and his brother Dr. Paul Conrad Peters.  He is survived by his son John Peters and his wife Amber Peters of Geneva, Illinois, daughter Beth Peters and her husband, Brad Fagg of Washington, D.C., four grandchildren Emma, Kate, Eliza and Jack Peters, his sister Mary Ann Schwartz of Kokomo, Indiana, his sister-in-law Kathryn Medina of New York, New York, his sister-in-law Lois Peters of Dallas, Texas, and his many nieces, nephews and cousins.  ‎Dr. Peters had been living at Stonegates Retirement Community in Greenville, Delaware with his dear friend Kathryn Stamm at the time of his death. 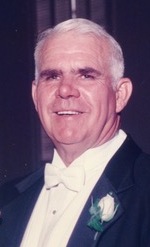 Duane Stoliker
John Wade writes,
Great man and great Vet. First met him when he started in Pinehurst. Good friend of my family. RIP John
Peggy Seaman writes,
Sending Prayers and Condolences to the family. I knew Doc from Liberty Bell and Brandywine days.
Karen Hamby writes,
The first time we met your dad , felt like we just met a old friend! So sorry for your lost , his was a life well lived.
Bill ODonnell writes,
My condolences to the Peter’s family. RIP Doc. 🙏🏻🙏🏻🙏🏻
Rob and Maggie Hill writes,
Our thoughts and prayers are with you.
Laura Ann Peters Martin writes,
Dear John-John & Beth, Our thoughts and prayers are with you at this difficult time. Also remembering the good times we shared together.
Evan Maple lit a candle
Rick and Vivian Schneider lit a candle and writes,
John, Amber, Emma and Eliza, We are so sorry to hear of Dr. Peter’s passing. His obituary reads beautifully. What an interesting and wonderful life he lived. We love you all. With Deepest Sympathy, Rick and Vivian Schneider
Charles Henry lit a candle and writes,
The world has lost one of its good guys. We will all miss John. My deepest sympathy to Beth and John.
Amber and Mark Kelley lit a candle and writes,
Our deepest condolences to your family and prayers for peace and light. What a legacy of love he has left for you. Love, The Kelleys
Judy and Mike Scrimenti writes,
Beth and John, Sending thoughts and prayers to you and your family. Your Dad was a wonderful friend to my parents and I will always remember his interesting stories about his vet days.
Maureen Corazza
GP Buxton writes,
A life well lived. A Legacy of Equine Excellence that lives on as a testament to that well lived life. Vaya con Dios JT
Sally jones writes,
It was just a short time ago in January when I met John and Kathryn. My dear friend Barby Hammett was giving me the grand tour of Stonegates and all of her wonderful friends while my husband was having his first chemo. It was a pleasure meeting you both, my condolences. Sally
Jim & Carol Woods writes,
John and I worked together for 16 years. He was an outstanding and revered veterinarian. He loved John and Beth deeply. He had a great fatherly pride in both of you; even when John was being a "boys will be boys." Both of my daughters remember him fondly and thought of him as "surrogate grandfather."
Pastoral Care Committee First Unitarian Church writes,
Our sincerest sympathies to his family and Kathie Stamm on the loss of John. Know that we care and please reach out to us if there is anyway that we can help.