Joan Catherine (Doyle) Krauss, 88, passed away peacefully at her home in Greenville, Delaware on October 7, 2021 after a short illness.

Joan was born in 1933 and grew up in Mayfair, Philadelphia with her father William, a butcher; her mother Catherine; and her younger brother William.
Joan, a homemaker and former third grade teacher, was married for 52 years to Walter M. Krauss, who passed away in 2011. As Walter, a sales executive, was transferred and promoted, the family lived in small towns and cities as far away as Lake Forest, Illinois and Atlanta, Georgia before settling in Greenville.

Joan loved books her whole life. Although there were no bookstores or libraries near her childhood home in Mayfair, she recalled the life-changing day that a librarian visited her first-grade class at St. Timothy School and told the children that they could sign up for their own library card, a bus ride away. Joan rode the bus to the library every week after that. Later, she worked for years as a Literacy Volunteer, teaching adults in downtown Wilmington to read. She read the newspaper every day and was always part-way through a novel by Jane Austen or Alexander McCall Smith. The bumper sticker on her Cadillac said, READ.

Joan was a proud graduate of Nazareth Academy and a card-carrying member of the National Honor Society. As a young girl, she sang at weddings and acted in high school musicals. She loved to jitterbug, and met her husband at a dance in downtown Philadelphia.

Although known for her steady practicality, Joan would sometimes pull over the family station wagon to watch a sunset with her children (“Beautiful sunset. Gorgeous!”).
Although she grew up in row houses, she loved the seashore so much that her husband would sometimes drive the family out of Atlanta to the coast just so she could see the ocean. The Krausses later built a house on Cape Cod where they spent many happy summers.

Joan also loved cut flowers, black licorice, the Philadelphia Orchestra, soft pretzels, french perfume, handmade pottery and the color blue. She loved to play board games with her grandchildren, whom she adored.

She was a devoted parishioner of St. Joseph on the Brandywine Catholic Church for nearly 50 years. She sang in the choir, served on the parish council, taught Sunday school, raised money, organized fellowship dinners, and even travelled to Ireland with St. Joseph’s.
She is survived by daughters Katharine, Mary Elizabeth (Thomas) Adam, and Barbara Ann (Jonathan) Stowe; her brother William Doyle and his wife Carol; her grandchildren Christian, Sophia, Charlton, Emma, and William; her niece Carol Ann Staudenmayer and nephew William Doyle.

The family thanks the entire staff of Stonegates retirement village and especially Heather Bemis and Ashley Martin for their loving care throughout her residence there.
In lieu of flowers, friends may make a contribution to Literacy Delaware in memory of Joan Krauss. 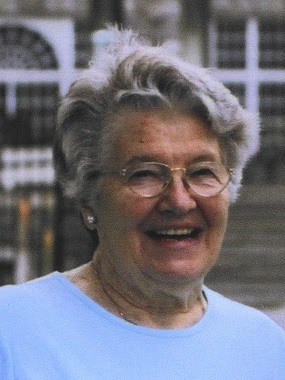 The Funeral Mass for Joan Krauss will take place on Wednesday, October 13th at 10:30am at St. Joseph on the Brandywine, 10 Old Church Road, Greenville, Delaware.

Heather Lynch Hansen lit a candle and writes,
Thinking of you Barbara. Loved your parents' house and your sweet sweet Mom.
Elsie and Russell Craig writes,
We send condolences to the Krauss girls on the loss of their mother. We remember you fondly from Hopeton Road.