James C. Conrad, 95, made his final landing Saturday, June 20 in Wilmington, the city he and his beloved wife Roberta had called home since 1977. This WWII pilot, father of 4, husband for almost 74 years, and DuPont photo products division employee for nearly 35 years was known for leading the Brandywine Hundred Library building campaign.

Born in 1924 in Easton, MD, to James and Mary Conrad, Jim served the nation and DuPont in far-flung places with enthusiasm and energy. Before graduation from Easton H.S., he set his cap for the girl who taught him to drive. They married while he was on leave, and then Jim flew C46s and C47s in the Pacific theater for the US Army Air Forces’ 9th Troop Carrier Squadron. After his service, Jim earned a B.S. in chemical
engineering from University of Maryland in 1950. He and Bert moved often to posts DuPont offered in the northeast and then to Shimizu, Japan, as construction supervisor and manager of a photo products plant. All the while, they raised their family of 4.

While in Japan and after Jim retired in 1984, they visited Southeast Asia, Bali, the
Philippines, Australia, British Isles, Russia, Europe, and U.S. resorts. At home they golfed, danced, volunteered, and played bridge at Sellers Senior Center. After Bert died in 2018, Jim lived on by their shared mottos: “Enjoy!” and “Keep it moving!”

Back in the skies he loved since learning to fly in high school, this Del-Penn
Flyers member maintained instrument rating on a single engine Cessna well into his 80s. An advocate of general aviation, Jim was active in Delaware Aviation Support, Inc.

He belonged to St. Paul’s United Methodist Church for 40 years. Other members helped him attend until COVID-19 intervened. An enthusiastic singer in church and appreciator of all kinds of music, he enjoyed hearing his daughters sing or play the piano while he lived at Rockland Place.

Like Bert, Jim loved the outdoors. He led “the Conrad gang” through many state and
national parks, proudly watching each time they set up the family’s camp.

A “people person” to the core, Jim encouraged others to support causes he believed in and to contribute in their own way to the communities he and Bert called home. As a member and longtime president of Friends of the Library, his passion for reading and
education inspired him to make the case and raise funds for the library on Foulk Road which opened in 2003. Jim’s confident, well informed voice – his broad, winning smile – and his headful of white hair will be missed but never forgotten.

Jim was preceded in death by his parents and brother, Jack; his wife, Roberta; and their son, Bruce Conrad. He is survived by three daughters: Charlotte Grant (Roger); Barbara Conrad; Nancy Conrad ; two grandchildren, and 4 great-grandchildren. 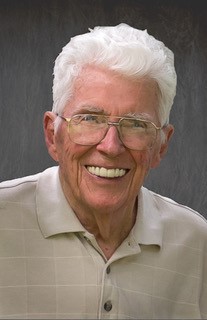 A celebration of life will be held at a later date. Those who wish to honor Jim’s memory may make gifts to St. Paul’s United Methodist Church, Friends of Brandywine Hundred Library, www.friendsbhl.org or the charity of their choice.

Gary and Laura Curran writes,
Our deepest sympathies for your loss
Diana Pope writes,
I have many photos and fond memories of Bert and Jim celebrating nature’s bounty at Barbara’s annual garden party. Decorated with flowers and ribbons, with glasses of champagne held high, the two of them obviously enjoyed living life together to the fullest!
Sara Bauman writes,
What a beautiful life story! I only met your Dad once, Barbara, but I too was impressed with his smile and the stories he told of your family and all your outdoor adventures. I’m very sorry for your loss. Sara
Paula Puglisi lit a candle and writes,
You have been a loving daughter, Barbara, you and your sisters seemed to work well together on behalf of your parents. Love to you, Paula and Darrell
Annemarie Hall writes,
Sending the family sympathy during this difficult time. So sad to learn this news. Jim always brightened my day when I would see him while visiting my father. He was always so positive. Fondly, Annemarie Hall (daughter of Jim Hall, Jim’s table mate at Rockland)
Mike & Judy Grater writes,
Your Dad (& Mom) were just about the best part of moving to Wilmington - landing in the house next door to them. So sorry to learn of Jim’s passing. What a wonderful man.
Dorothy Marengo writes,
It was a wonderfully complete obituary about your dad and reminded all of us of all that he did for the community. He had a very full life!! Dorothy & Susan Marengo PS By the way he was my husbands boss in Rochester, NY.
Anne Chance DuBois lit a candle and writes,
When my family visited the Conrad gang, the girl cousins sometimes got rowdy and after several calls up the stairs to “settle down” we would hear footsteps and pray it was Uncle Jimmy and not Uncle Marion!! Uncle Jimmy would talk us into being quiet, which worked❤️
JoeAnn Knauss writes,
How we loved his energy and enthusiasm. I learned his story in my first week of working at his library. The library staff and community are blessed to have been the beneficiaries. Energy and enthusiasm are contagious. He was a wonderful man. We are truly sorry for your loss.
Jackie Conrad Etzweiler lit a candle and writes,
I had just connected with Nancy and was so excited to find that there was still family in the area and then the quarantine hit. I never got to meet him. He sounds like he was a fun individual and I dearly wish I could have met him. My sympathy to the family and to everyone knew him and loved him.
Kendra Mon and Eugene Lane lit a candle and writes,
We only met Jim and his wife Bert one time through Barbara. They were very welcoming and considerate. It's nice to learn more about him and the family's growing up years and the love of nature and adventure Barbara inherited. We both deeply appreciate the combined care he received from his daughters in his final years and our hearts go out to them.