George was born in 1929 in Hackensack, MN, the son of George and Frances Parshall. He grew up in rural Minnesota during the Great Depression, often in a home without electricity or running water. He overcame these hardships and attended the University of Minnesota where he received a Bachelor of Science degree with highest distinction, followed by a Ph.D in organic chemistry from the University of Illinois. He joined the Central Research Department at the DuPont Experimental Station in 1954, eventually becoming Director of Chemical Sciences.

Following his retirement from DuPont in 1992, he embarked upon a second career assisting the National Research Council in developing methods to safely dispose of the U.S. Army’s stockpile of chemical weapons. George was elected to the National Academy of Sciences, received DuPont’s Lavoisier Award, received two major awards from the American Chemical Society, was a guest lecturer and wrote many scientific articles and a textbook.

In addition to his professional accomplishments, George will be remembered as a loving husband, brother, father and grandfather and as a thoughtful friend and mentor.

George was predeceased by his parents and first wife, Naomi. He is survived by his wife, Anna Mae; his brother, Jim; his three sons and their wives, Bill (Marilyn), Jon (Maryann) and David (Susan); his grandchildren, Kelly, Michael, Dan, Chandler, Nathan and Joshua; his stepdaughters and their husbands, Nancy (John) and Betsy (Mike); and his step-grandchildren, Michael, Kevin, Melissa, Tina and Michaela, all of whom will miss him greatly.

In lieu of flowers, contributions may be sent to St. Michael’s School and Nursery, 700 Walnut St., Wilmington, DE 19801. 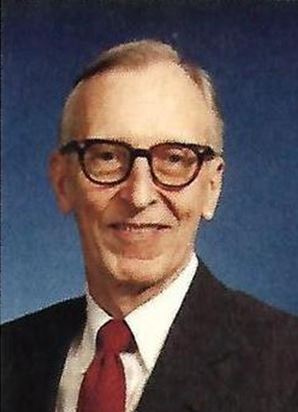 Tom Ford writes,
Dear Anna Mae and Family, I am so sorry to learn that George has passed on. He e was a good friend and coworker at the duPont Experimental Station over many years, and an outstanding scientist. It is especially coincidental that he passed away within 2 days of another good friend and coworker, George Sausen, whom I held in similar high regard. I'm hoping to make it to August 29th, when I'll be 102 years old. Tom Ford
Mike Barker writes,
George was the group manager at the time I came to DuPont 51 years ago. He was always encouraging to those of us in his group, and would consult for any issue needing to be addressed. His memory is pleasant indeed!!