George was born in Athens, Greece and served as a Chief Petty Officer Radar Technician in the Greek Royal Navy before coming to the United States. He worked for ARA Food Services in Delaware for 36 years as a Vending Division Manager. In 2000, George earned his Bachelors in Business Administration from the University of Delaware. He was a member of AHEPA, and held the position of District Governor Chapter 95 of Wilmington, the International Hellenic Association, and he was a Founder of the Odyssey Charter School and Board Vice President.

George is preceded in death by his parents, Nicholas and Maria Rigos, and a daughter, Joanne McGhee. 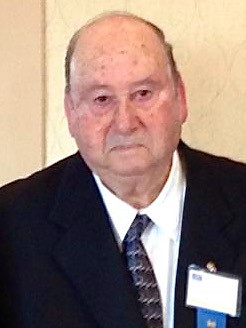 Jeanie Klezaras writes,
I am so sorry to hear this. May his Memory be Eternal.
Despina Wilson lit a candle and writes,
Legendary man. Mission accomplished! He will always be remembered. May he rest in sweet peace. Prayers for the family. Καλό Παραδεισο!
Mary V. George writes,
Dearest Elaine, I send to you and your family, my deepest sympathy and love. George was a legend in our community. He has been missed for a long time. Demo and he had a special bond. He was always there for us. I pray the Lord will give you the strength you need to get through this loss. May you and your loved ones live to remember him. May his memory be eternal.
John N Frangakis lit a candle and writes,
Dearest Elaine, We’re extending our condolences for the loss of your beloved George. We feel so privileged to have known such a rare gem of a human being! We’ll miss him terribly. We hope and pray our merciful God eases your pain and helps you and your family keep alive all the beautiful memories of a lifetime May his memory be eternal Ο Θεός να ανάπαυση την ψυχούλα του🥲🥲
Dimitra Pappoulis writes,
May he rest in peace 🙏 prayers for the family. Καλό Παράδεισο George. Sorry for your loss Elaine the young at heart ❤
Johanna Laskaris writes,
Dear Mrs. Righos and family, I will always remember the wonderful times we had at Cape Henlopen camp with Mr. Righos doing all the cooking! He was a very sweet man. God bless you and your family.
Constantine Fountzoulas lit a candle and writes,
Dear Elaine and family: My family and I, are extending to you and your family our condolences for the passing of our friend George, I am so happy that last year, students of the Greek School of the Holy Trinity, who were escorted by their teachers and I, as the director of the Greek School of Holy Trinity, we stopped by your house and the kids sang and the Christmas carols. Αιωνία του η μνήμη! Να ζήσετε να τον θυμώσαστε, Fountzoulas Family
Kwame Osei lit a candle and writes,
May the Lord receive you in His bosom.
Kwame Osei writes,
May the Lord receive you in His bosom and bring comfort to your love ones.
Christina Lazopoulos writes,
Dear Mrs. Righos, My heart aches with sadness for the passing of Mr. Righos. You were both so influential in our youth in the church community. You brought such warmth and love to all of us and brought us such joy through activities, especially summer camp. You enriched our lives in ways that only love can bring. Thank you both for that. My parents will receive him with open arms, as will many who loved him. May his memory be eternal. May God give you strength and comfort.
Matina Goga writes,
I am extending my deepest sympathy and condolences to the family of dear Mr. Righos. I am so sorry to hear the sad news. I will always keep him dearly in my heart and memory. Mr. Righos was an amazing human being, a great man, who built bridges between Greece, our place of origin, and the U.S. and I was so fortunate to meet him and work together and along with his dear colleagues for the noble cause of educating the young generation with values derived from Greek heritage. May his memory be eternal, God rest his soul, and give you strength to endure the pain of his loss. Αιωνία του η μνήμη.
Stephanie Frangia Baker lit a candle and writes,
To the entire family, my condolences on the passing of Mr. Righos. I will always remember Mr. Righos’ beautiful peacefulness and calm demeanor. I will pray for his soul to Rest In Peace. May God bless each of you in your time of sorrow.