Fraser Bouck, age 99, sadly passed away with his family around him at home, on Tuesday, the 4th of February 2020.

Fraser had a long and interesting life. Since a small boy, flying was his life’s passion and it took him all over the world: he flew P51s during World War II; saw active duty flying F-84s against Russian MIGs in Korea; saw service with SAC in Europe and other places we can’t name… followed by a stint of test pilot work at Point Mugu in California with the likes of Chuck Yeager. Somewhere during this wild time he ended up under the Arc de Triomphe in Paris where he met the love of his life, Beryl, who became his wife. We’re not sure if it’s true, but the story goes that she had to marry him to get her money back after she bought the coffees!

He settled down a bit when the kids arrived, working at Chicago Bridge and Iron Company. If settling down meant stints in Chicago, London, Beirut, New Jersey/NYC, back to Chicago, back to London (twice), and New Castle, DE of course… Beryl who always gamely followed once the kids were out of school used to say “well, I got all the curtains sewn for this house, must be time to move again.” Those were just the places he and the family called home for a certain period. His work at CBI also regularly took him throughout the Middle East, North Africa, India, Pakistan and Australia.

Aside from flying, he was a French horn player who marched with the Purdue marching band while studying engineering. Once he retired from CBI, he started playing his French horn again where he played in 2 different bands until 6 months ago. If David Amato and the Delaware Symphony, were performing Mahler, he was always in the audience (lots of horns).

He didn’t appear to have regretted a day of any of it–that we know of. His last time skiing was when he was 88 and he bragged about getting the old people’s discount. The family had begun planning for his 100th birthday which would have involved two of his other passions, single malt whiskey and oysters. Fraser claims his key to longevity was a single malt Scotch each evening.  At his birthday for the past few years, we’re embarrassed to say he took full advantage of his guests’ generosity, who always brought bottles of the liquid-of-life so he could stock up for another year. For his 98th birthday, the family and friends celebrated with a staffed oyster bar. We don’t know how many he ate but he seemed to be at the front of the line a lot!

He leaves behind his wife Beryl, his daughter Gail, his sons Steven and Andy and their wives, Renee and Juveth, plus six grandchildren. He was predeceased by his grandson Steven. Jill, we are thankful to have had your loving support as part of our family during these past few months.

Here’s to you Fraser. Here’s to a life well and fully lived.   He used to say he was going down to the Devil when he passed because that’s where all his friends were going. But we know better. We’re going to miss you. 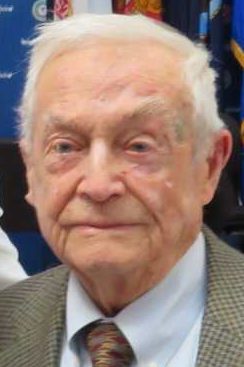 Robert Yamazaki lit a candle and writes,
Fraser was a wonderful friend who I was fortunate enough to spend time with reminiscing about flight and flying, world travels and the family. We would, of course, enjoy a sip of Single Malt or, earlier on, a Martini. Rest well my friend and enjoy your eternal journey. You will be missed and always remembered.
The Rev. Dr. Peter E. Van Horne writes,
Fraser and I were both in the horn section of the Intermediate Band at OLLI, the Life-Long Learning Center of the University of Delaware, Wilmington. Over the last several years I enjoyed learning from Fraser about his military service, places where he was stationed, and about his family. I particularly enjoyed learning from Fraser about seeing the famous late Dennis Brain play his last French horn concert in England. For some of us, Dennis Brain was the finest horn player ever to pick up and master the notoriously unforgiving instrument. Thank you, Fraser, for your stories and for being an example of one who loved the French horn and who persisted in playing as best as he could. Peter Van Horne
Richard Leaning writes,
For the family of Fraser Bouck, please accept our condolences for the passing of your husband and father. We had the pleasure of serving with Fraser, over the years as a good neighbor in the North Star Community and active member of the North Star BSA Troop. May he abide in love and peace now within the arms of our Heavenly Father. With Sympathy, Jackie and Dick Leaning
Stephen Toth writes,
Fraser Bouck was "one of a kind" and a CB& I colleague that will remain unforgettable in all of our memories. A story teller without peers and what a wonderful story is his well lived life. I am thankful that our paths crossed in our lifetimes. My sincere condolences to Beryl and the extended Bouck family.