Dr. Narayan “Anil” Ganesh Patel passed peacefully in his sleep on December 31, 2022 in Wilmington, Delaware. He was loved by many and will be missed dearly.

Narayan, known to his family and friends as “NGP” or “Anil” was born in 1928, in Gunjala, Gujarat, India to parents Ganeshbhai H. Patel and Raiben G. Patel. He was the second oldest of eight children and grew up in a rural village with an innate curiosity about the world around him. As a young child, he was fascinated by the books in his local library and thought to himself “Who wrote these? What do they say? When will I read them?”. These were not idle questions. Narayan made a plan and two summers later read every book in the library.

He was a lifelong learner, avid photographer, nature lover with a lifetime membership to Longwood Gardens. Narayan possessed an insatiable curiosity about the world around him and shared that curiosity with anyone who would lend him an ear. His curiosity led him to many corners of the world, including the United States. Upon immigrating to the United States, Narayan completed his PhD from the University of Minnesota. He joined DuPont as a scientist in biochemistry and toxicology and applied his knowledge of plants and insects. While at DuPont, Narayan and a colleague were issued a patent on justicidins, isolated from the plant Justica extensa also known as the water-willow or shrimp plant, for its insecticidal and antiviral properties. A dedicated student of Ayurveda, a traditional form of medicine practiced in India, Narayan believed in the healing properties of plants and led an expedition to India in 1985 to study the medicinal properties of plants in India.

Narayan believed in the “American Dream” and hard work. He supported many family members in their journey to immigrating to the United States to create a better life for themselves and their families.

Narayan is survived by his son Neilu, daughter Ulka, grandsons Robert and Andrew, brother Govind, and sisters Anandi and Geeta.

Services for Dr. Patel will be held Friday, January 6 from 2:30 PM at Chandler Funeral Home, 7230 Lancaster Pike, Hockessin, DE 19707. Family and friends are invited to share their memories of Dr. Patel at the service. 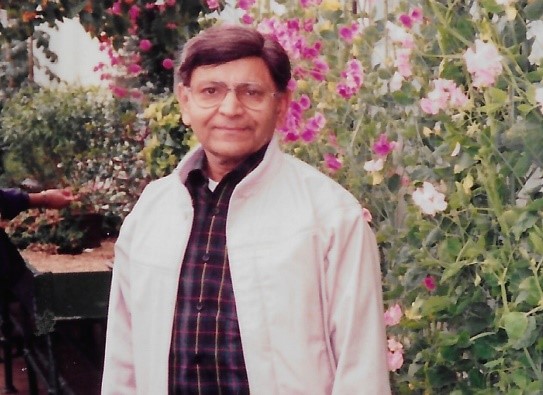 Services for Dr. Patel will be held Friday, January 6 from 2:30 PM at Chandler Funeral Home, 7230 Lancaster Pike, Hockessin, DE 19707. Family and friends are invited to share their memories of Dr. Patel at the service.

Yogesh and Manisha Patel lit a candle and writes,
As NGP said, “what a family!” And we all have to agree that he is absolutely right. In response to his remarks I would say “what a lovely human being!!” He contributed the most to the GHP family and many others to make their American dream come true. Love you Mama and Thank you for all you have done. We will remember you forever 🙏
Kerin Hearn and Dan Brody writes,
So many conversations with Dr. Patel at lunch at the JCC. We were in awe of his vast knowledge and ever willingness to share with anyone who might be in need his knowledge of plant and medicine. His life was spectacular—his travels to unique places across the globe and the world famous people he met along the way. We will miss his wonderful stories. Kerin and Dan
Rosemary Volpe writes,
Those who didn’t know him will never realize what a great Dr Patel was and the contributions he has made to the world He being the subjective and Rosie being the objective a very strange relationship we had respecting each one of each others gifts He never wasted a moment always exploring, learning, analyzing and finding possible cures-even when he met me an enigma who challenged his thinking subjectiveness A great loss to humanity
Alison Smith Driscoll writes,
It was a delight to meet & get to know Dr. Patel through our shared love of Ayurveda. We taught together at Osher Lifelong Learning for a number of years. We had great fun together, both in class & on our long walks at Longwood. He & my mother, who is the same age, are epitomes of lifelong learners who showed me how to age dynamically, gracefully & wisely.
Govind Patel writes,
I was lucky to spend more time with NGP Since 1968.when Raiba was there I use to go every weekend and cook for them.we will discuss lot of things like Ayurveda. He was brilliant guy, I use to tell him when you die they should preserve your brain for study.I visited Dupont where he worked as scientist.he will be so happy whenever I bring Jalebi for him. Love you brother. Govind
Kathryn A Garden lit a candle and writes,
Ulka, Mike, Rob & Drew- So very sorry for yours loss. May God Bless you all and know that you are all in my thoughts & prayers Kay
Sujata Patel lit a candle and writes,
Sorry about a loss of such a great person. I am sure that his soul is going to some higher level. My brother Jayantibhai was vey fond of him, I first met him at my brother’s home. Then I visited him couple of times till about 5 years back. My last visit was remarkable, I took a friend who had breast cancer. We had good time reviewing all. After checking vitamins on Avatar, we went out to eat late lunch and then buy some wine. I was so impressed with his knowledge, passion and his curiosity ; he was learning Chinese in addition to all he knew about healing by using various modality. He enjoy teaching as well. Sorry to loose such a great person!
Pushpa Chauhan lit a candle and writes,
Dr Anil Patel was was an incredible spirit , full of intellectual and spiritual wisdom , in addition to a happy soul. He was a man of giving with his head and heart ♥️ I met him to see what remedies he could offer as I was diagnosed with Breast cancer . He offered me laughter and fun and I ran with it with his famous quote “ let’s do happy hour “ do you know why they call it happy hour, so we can have a drink , appetizers and have laughter 😂 as we leave our work behind for the day . Happiness heals us . Let me cheer you with a happy hour 🥂in the heavens . I will miss you and your happy twinkle eyes of wisdom . Pushpa Chauhan
Elba M Sepulveda-Cabassa lit a candle and writes,
I am sorry for your loss. I hope Dr. Anil Patel finds the peace needed to rest, and I hope your family finds the resignation to celebrate his life and all the good things a human being can achieve. My heart is with you and your family, and my prayers are for him. Sincerely, Elba
Kamaljit Singh lit a candle and writes,
I met him at the JCC lunch hour and was impressed with his knowledge of Sanskrit and Indian horoscope which we would discuss, aside from his expertise on his scientific research in biochemistry and plants research. He showed me his Avatar machine and we did some tests. He was very versatile with his research in ayurvedic medicine and showed me his books. Subsequently I moved in with him as roommate and we would always discuss ayurvedic cures and their scientific analysis! We also enjoyed food at Mexican restaurants with his favorite Margherita. We also played cards and listened to old Bollywood classic songs. He was a noble and kind soul and I will miss him dearly!
Adrienne lit a candle and writes,
Blessings to Mr. Patel and all of his family. 🙏